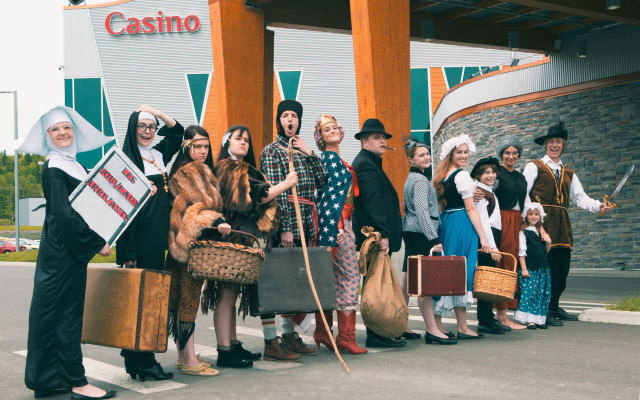 MADAWASKA MALISEET FIRST NATION, N.B. — Midseason results are in for the show “Party in Acadia of the Lands and Forests.”. Eight of the top nine performances were sold out, totaling nearly 2,400 spectators, which rewrote the record books for the business. The previous record was 2,300 in 2015.

Organizers say that what is even more impressive is the demand for tickets. Last week many people learned that the show was sold out for the following week.

According to Hugues Chiasson, president of the Promotion Committee of Acadia of the Lands and Forests, even if the room is a bit larger this year with a capacity of 300-325 seats, the demand exceeds the supply. Chiasson believes the new Grey Rock Casino theater has had a positive role to play in increasing the number of spectators.

“The place in itself is a tourist attraction, which causes many tourists to learn at the last minute that a show takes place in the establishment. These are in addition to our many reservations,” he noted.

Chiasson noticed an increased number of U.S. visitors to the performances. “Normally, 10 percent of our bookings are from Maine and the United States. This year, this rate is rather between 20 and 25 percent.” He said reservations are already at 50 percent for the next two weeks, with some shows almost complete.

“Our show ‘Newcomers’ started dramatically, and word of mouth did the rest. At the end of the performances, the comments heard from the spectators are the same: Outstanding young artists, a show of professional quality, a room with comfort and sound quality, as well as catering and entertainment services represented a substantial addition to the product,” he said.

With the arrival of tourists from Quebec this week, the organizers expect the second half of the season to be busy.

As the Maine Turnpike expects 1 million travelers alone over the Labor Day weekend, policymakers are gearing up for a sprint to solve one of the state’s most intractable problems: a long-standing — and growing — transportation funding gap.
Apex Weather END_OF_DOCUMENT_TOKEN_TO_BE_REPLACED

A strong Arctic cold front will push into the region from the northwest tomorrow with a chance for some light snow across the region.
Our Sponsors END_OF_DOCUMENT_TOKEN_TO_BE_REPLACED