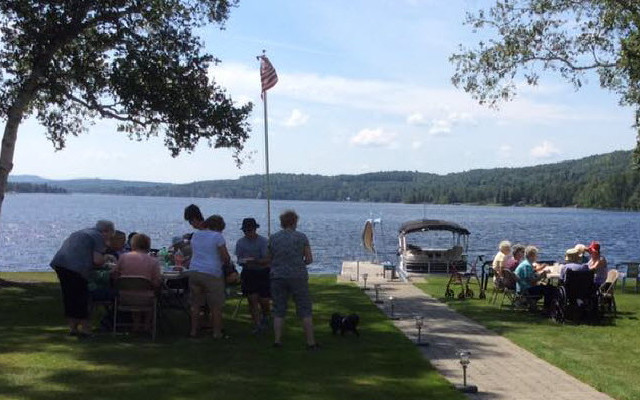 EAGLE LAKE, Maine — Gary and Pauline Dumond of Eagle Lake opened their home to residents of Crosswinds Residential Care on Thursday, July 21 for an afternoon picnic party. Nearly 20 residents of the Fort Kent assisted living center took part in the outing at the lakefront home, where the Dumonds have welcomed them for the past three years.

A group of men, who all live at Crosswinds Residential Care in Fort Kent, make new connections on the shore of Eagle Lake, July 21, 2016. (Contributed photo)

“They love it. They look forward to going there every year. It’s just so peaceful at the lake. Some of them just sit in lawn chairs looking at the lake,” Crosswinds Activity Director Assistant Patti Voisine said.

Crosswinds employees prepared hamburgers and hot dogs, which Gary Dumond picked up and delivered to his home ahead of the residents’ arrival. Gary, along with Delman Pelletier and Dave Bourgoin, manned the grill while the guests socialized and recalled memories from their younger years amidst sunshine and fresh breezes sailing off the water.

“One gentlemen, it was his first time going. When we got back, I said ‘did you enjoy it?’ He just said how much he loved it. He said it reminded him of his home,” Voisine said. “And the next day another resident told me how the men were all sitting together. He said, ‘We just learned so much from each other.’ He said they talked about things from the past and found out things like how they were all connected in one way or another. It was nice. They all enjoyed it.”

The picnic lunch also included a special jello cake which Pauline Dumond prepared for her guests.

Those guests who wanted a closer look at the lake were treated to a ride on a 25-foot party boat.

Gary Dumond said he and his wife have no reservations about opening their home to the residents each year. “I’ll tell you – that’s pretty easy. My wife’s dad passed a couple years ago. He was a resident of Crosswinds and the four or five years he was there, every summer they would take him somewhere along with the other residents and do a summer thing. After he passed away we said we’re gonna do this here because they had been so good at doing this for everybody.”

Two of Gary’s uncles are now living at the assisted living center, as is Pauline’s sister. All attended the outing at the Dumond home this year.

Grill masters prepare hotdogs and hamburgers for Crosswinds guests at the home of Gary and Pauline Dumond in Eagle Lake. (Contributed photo)

Gary said he and Pauline appreciate the care with which Crosswinds employees have treated their loved ones throughout the years. “The girls at Crosswinds are just out of this world and they’re just so well organized,” he said. “They do a lot for them over there. This is just one of the places they come. They do all kinds of things. They take them everywhere.”

Voisine said such an adventure is truly a community effort. “We had a lot of volunteers – good volunteers – family members that came … Our director of nursing, Lynn Pelletier was there. That way if something happened we had a nurse on hand.”

And of course, Voisine said the outing could not have taken place without the generosity of the Dumonds. “We appreciate so much what they do for us. They’re so good to open up their home,” she said. “They’re very, very generous people and we appreciate what they do.”

According to Gary, Crosswinds residents can look forward to another outing at their home next summer. “We’re gonna keep doing it. We start looking forward to it two months before.”

“But the sun should shine on the Crosswinds (employees) because they just do such a good job there everyday,” he added. “You can’t always just take. You gotta give sometimes, and we enjoy doing it. We just love doing it.”

As the Maine Turnpike expects 1 million travelers alone over the Labor Day weekend, policymakers are gearing up for a sprint to solve one of the state’s most intractable problems: a long-standing — and growing — transportation funding gap.
Apex Weather END_OF_DOCUMENT_TOKEN_TO_BE_REPLACED

A strong Arctic cold front will push into the region from the northwest tomorrow with a chance for some light snow across the region.
Our Sponsors END_OF_DOCUMENT_TOKEN_TO_BE_REPLACED