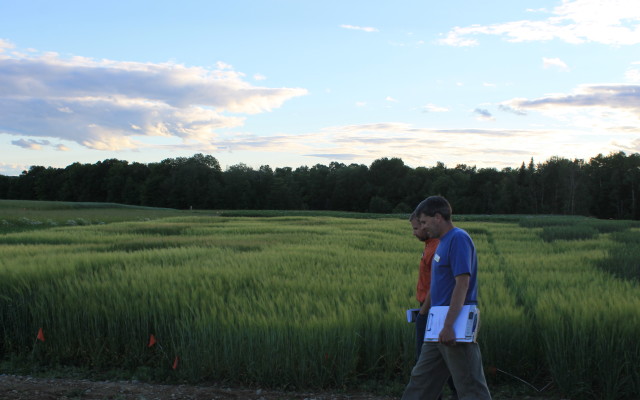 Flax plants bloom in the morning and drop their petals. Once pursued as a linen fiber in Maine, flax, is getting new attention at the Aroostook Research Farm as a potential food crop for its oil and seed. July 19, 2016. (Star Herald – Anthony Brino)

Researchers with the University of Maine Cooperative Extension are studying 25 different varieties of barley, the base grain in many beers, to help farmers and brewers learn more about the best barley for malting, the process of preserving enzymes that help starches turn into sugars and alcohol.

Beer- and food-grade grains have more protein and better overall quality than grains sold for animal feed, and craft beer uses three to four times as much malt as mass-market beers like Budweiser, said Andrew Plant, a University of Maine Cooperative Extension researchers who’s working on the variety trial.

“From a local economic scale, that means a lot to people when you can be selling four times as much” and at a higher price, Plant said at a recent presentation at the research farm.

In the second year of the project, with a grant from the Brewers Association, a trade group representing craft beer makers, UMaine researchers at the Aroostook Farm in Presque Isle and the Rogers Farm in Old Town are collaborating with other research groups across the Midwest, Northeast and Maritime Canada to test the 25 varieties.

Compared to America’s grain belt in the Upper Midwest, Plant said that Maine is more humid, which is part of the impetus for the trial — to find varieties that work well.

“Variety selection is probably the first step a grower can take in addressing quality parameters,” said Tom Molloy, a researcher with the extension and the Northeast Sustainable Agriculture Research Education program.

The trouble is a lot of farmers in The County may have experience with just one variety of barley, Newdale, the standard required in many contracts, Molloy said.

“Maybe these trials might help growers here say, ‘Maybe you could offer another one?’ Or, this one is better than what’s on the contract.’”

Developed in Manitoba in the early 2000s, Newdale is a standard malting barley variety that’s adapted to a range of regions and soils as well as organic methods. That variety is also, for now, the standard at the Maine Malt House, the startup malting business of Buck Farms in Mapleton, said Jacob Buck.

“We are interested in the new varieties if we can find one that yields well and malts well, but for now Newdale is working good,” Buck said.

Elsewhere at the Aroostook research farm this summer, Jake Dyer, the co-owner of Benedicta Grains and an alternative crops specialist with the Maine Potato Board, is overseeing experimental plots of pulses — peas, chickpeas and lentils — and flax. His goal is to help potato farmers find marketable crops to add to their rotations.

Pulses, a part of the legume family, are well adapted to cool climates and are gaining in popularity, as a gluten-free, high-protein and fiber-rich ingredient in everything from chickpea hummus to pet food, Dyer said.

“I find peas to be the easiest pulse,” said Dyer, who’s been doing trials with field peas for four years.

“You can plant them early, when the ground is 40 degrees,” and they “require really no inputs,” such as fertilizers and pesticides. Their seeds, like other legumes, benefit from inoculation with a symbiotic bacteria to help fix nitrogen.

“I think if we can work on some marketing, they’ve got some potential,” Dyer said.

Chickpeas and lentils may be more of a challenge, although “so far so good” with this year’s trials, Dyer said.

Chickpeas and lentils are cool-weather crops, though typically grown in regions with less summer rainfall than Maine, and they’re at risk of a number of fungus-related blights. Those can be kept at bay with fungicides, which are commonly used on grains and potatoes, but “fungicides can chew up the bottom line” and lose their effect over time, Dyer said.

Flax, a flowering plant that produces an oilseed as well as linen fiber, can be grown like a grain, with a number of disease resistant varieties, and could do well in the new food market, Dyer said.

“I’ve always wanted to grow it. It’ll be interesting to see come harvest time,” he said. The plot has two varieties of oilseed flax and the plan is to send them to test kitchens at different food companies.

Flax is not new to The County. At one point in the mid-1990s, as many as 40 farmers planted some 1,500 acres of flax to supply Aroostook Flax and Linen. Led by two Connecticut businessmen and financed with government loans, the company supplied farmers with flax seed and equipment and ran a small scutching mill that separated the fiber from the plant and exported it to linen makers in Europe.

After two years running the mill, a deal with a European company fell through and the flax company defaulted on its loans and rent at the Presque Isle Industrial Park. The mill’s equipment and raw flax and seed were later auctioned.

Sam Blackstone, who grows blueberries, apples and vegetables at Circle-B Farms in Caribou, remembers the brief run of flax from his time as a field operator with the flax company, working with the farmers who contracted to grow the plant.

“The crop grows very well here. I think it would have worked.”

As the Maine Turnpike expects 1 million travelers alone over the Labor Day weekend, policymakers are gearing up for a sprint to solve one of the state’s most intractable problems: a long-standing — and growing — transportation funding gap.
Apex Weather END_OF_DOCUMENT_TOKEN_TO_BE_REPLACED

A strong Arctic cold front will push into the region from the northwest tomorrow with a chance for some light snow across the region.
Our Sponsors END_OF_DOCUMENT_TOKEN_TO_BE_REPLACED