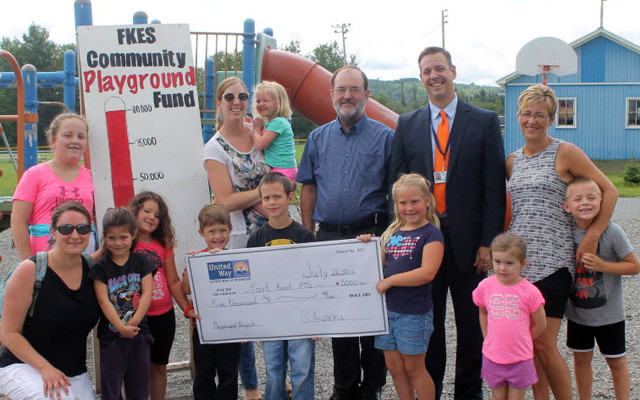 Jessica Potila, SJVT / FhF Staff Writer • July 27, 2016
Elementary school kids in 'The Little Town That Could' will have a new playground this fall, thanks to a vast PTO fundraising initiative and creative community support from both near and far.

“I really see this playground as an example of what we can do when we work together,” said Jennifer Levesque, chairperson of the Playground Committee, a subcommittee of the Fort Kent Parent-Teacher Organization.

“While most districts pay for such equipment directly, the FKES PTO understands that the district is struggling to maintain essential services and does not currently have the funds for such a project. As such, we have been happy to lead the effort to replace this valued school and community play structure,” Levesque wrote in a statement Wednesday, July 27.

“It’s really important for us to be able to support the people of the St. John Valley,” said United Way of Aroostook Executive Director Sherry Locke. “The playground will be around for years for kids to use. It also encourages family time and outside time, which we also think is important.”

Efforts to raise money to replace the 28-year-old playground currently at the school began with PTO members selling popcorn to students in school last fall. Local businesses and members of the community soon responded in kind with donations of their own.

The USDA approved a grant in the amount of $42,000, which propelled the PTO’s decision to begin construction on the playground September 26, which is during the school’s harvest break. “If we hadn’t gotten that (grant) we wouldn’t be breaking ground this fall, but now we can,” Levesque said.

The project should take less than a week to complete, weather permitting, according to Levesque.

“With what we have in the bank, and what we’re getting today (from the United Way on July 26), we have about a $20,000 shortfall. We’re still working with a number of potential donors. We’re also looking at some different financing options. We just don’t want to make the kids wait another year just because of $20,000.”

On Tuesday evening, the Maine School Administrative District No. 27 Board of Directors approved a loan of $20,000 to the PTO to cover the shortfall.

“In the unlikely event that we are still short when it comes time to pay for the structure, MSAD 27’s Board of Directors has approved a loan for up to $20,000 from the rainy day fund to be paid in full by the FKES PTO within two years,” Levesque wrote in her statement.

Levesque emphasized that she considers the rainy day fund a “Plan B, and we may not even need it.”

“What is especially exciting to us is that this comes with no cost to district taxpayers. In the event we fail to meet our fundraising goal within the next two months, we will still be able to pay for the structure in a timely fashion, and then we can use fundraisers already planned for the fall to start paying off any borrowed funds,” Levesque wrote. “This is a great way for the district to support a project that will benefit students from all ends of the district without having to absorb any of the project costs. The FKES PTO congratulates the board and the superintendent’s office on their creativity and can-do spirit in this matter.”

Levesque said the PTO is organizing the community building of the playground, and they will be seeking volunteers “to help build and install the new structure, with supervision from the rep from our playground equipment vendor.”

Those interested in volunteering to help build the playground may contact Fort Kent Elementary School Principal Gary Stevens at 207-834-3456 or garystevens@sad27.org

The PTO also has a GoFundMe campaign to help raise money for the playground, which can be found at www.gofundme.com/2nuzhmj8.

As the Maine Turnpike expects 1 million travelers alone over the Labor Day weekend, policymakers are gearing up for a sprint to solve one of the state’s most intractable problems: a long-standing — and growing — transportation funding gap.
Apex Weather END_OF_DOCUMENT_TOKEN_TO_BE_REPLACED

A strong Arctic cold front will push into the region from the northwest tomorrow with a chance for some light snow across the region.
Our Sponsors END_OF_DOCUMENT_TOKEN_TO_BE_REPLACED