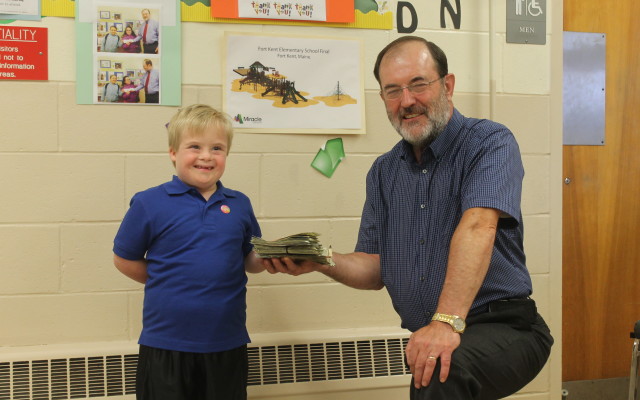 Jessica Potila, SJVT / FhF Staff Writer • July 27, 2016
What began as a beloved birthday boy's request for $7 donations to the Fort Kent Elementary School playground fund instead of presents soon turned into almost $1,000 for his school.

Devon turned 7-years-old on July 9. “We were having a small birthday party and parents were asking what they should get for Devon. I said he’s just so rich in love and faith; he doesn’t really need anything else,” said Devon’s mother, Lynne Cyr.

Devon agreed, but he did ask that friends and family attending his birthday party, in lieu of gifts, bring a $7 donation for the Fort Kent Parent-Teacher Organization’s new playground fund; and what began as a request for a $7 donation quickly grew into $942.

“He just has so many people in his life that felt this was a good thing for him to do so they donated the $7 and then some,” Cyr said.

The Fort Kent Parent Teacher Organization has been raising money for a new school playground since last year, to replace a 30-year-old playground which is falling apart, and which was not designed to meet the needs of some students, like Devon, who has Down Syndrome.

“The good thing about this playground is they got input from physical therapists and occupational therapists with the design of it, and Devon (receives) both. So it’s designed with a lot of diverse children in mind,” Cyr said.

Devon said he is looking forward to playing on the slides, swings and jungle gym once the new playground is built “because I want to do my exercise with my friends.”

The second-grader still had plenty of fun at his party. He said his favorite part about the party was playing the “obstacle games” which his brother Davis Cyr set-up for him and his friends.

The youngest of four children, including sisters Lora and Kayleigh, when he is not learning to read or contributing to his community, Devon likes to build things with his dad, Dennis Cyr. “He likes tools,” Lynne said. Stevens said that Devon will have his name included on a special plaque for playground donors who have raised at least $100. “I think it’s amazing, phenomenal and thoughtful,” the principal said of Devon’s contribution to the new playground.

And he also thinks just as highly of Devon as a student. “He’s wonderful. He’s cooperative. He comes here and works hard, and overall he’s very pleasant.”

“Devon and his family want to thank all of our family and friends,” Lynne Cyr said. “We are very grateful for the generous support.”

As the Maine Turnpike expects 1 million travelers alone over the Labor Day weekend, policymakers are gearing up for a sprint to solve one of the state’s most intractable problems: a long-standing — and growing — transportation funding gap.
Apex Weather END_OF_DOCUMENT_TOKEN_TO_BE_REPLACED

A cold front moved through the Valley early this morning, and it will be followed by an Arctic cold front this afternoon.
Campaign Corner END_OF_DOCUMENT_TOKEN_TO_BE_REPLACED

Tomorrow, Saturday, Nov. 3, 2018, U.S. Senator Angus King (I-Maine) will continue his Get Out the Vote initiative in Aroostook County.
Our Sponsors END_OF_DOCUMENT_TOKEN_TO_BE_REPLACED