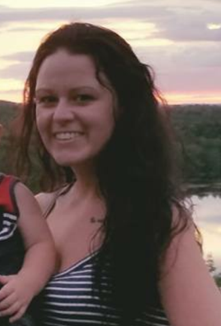 Joseph Cyr • July 27, 2016
Police report that they have found Cassandra Bell, a Houlton woman who was missing earlier this week, alive.

HOULTON, Maine — A 34-year-old Houlton woman missing since early Monday morning was discovered alive Tuesday afternoon, July 26, just a short distance from the home where she had last been seen Sunday night.

Houlton Police Chief Joe McKenna confirmed Tuesday afternoon that Cassandra Bell was found just before 4 p.m. in the back section of Evergreen Cemetery, located on Smyrna Street. The cemetery is located a short distance away from Bell’s residence on Bridge Street.

McKenna said a family that was visiting the cemetery spotted a blue blanket, which had been linked to the disappearance, in a wooded area on the edge of the cemetery and contacted police. A state game warden was dispatched to investigate and found Bell sitting under a tree, on a knoll overlooking a gravel pit.

The discovery was made just five hours after McKenna and approximately a dozen members of Bell’s family and several of her friends attended a press conference where it was announced that police were ramping up the search for the woman. He said that Bell was considered “endangered missing” and the search was being conducted because of her prior history of self-harm.

Bell’s two brothers, Joseph Flood of Old Orchard Beach and Freeman Flood of St. Albans, described their sister as a warm, caring and “mothering” individual, but said that she had struggled after the death of her sister in a car accident one year ago and the death of her father in 2014.

The chief said during the press conference that upgraded efforts involved the Maine Warden Service conducting a grid search of nearby woods and rivers and the Aroostook County Sheriff’s Office and Maine State Police bringing in more police tracking dogs. A police dog was used earlier, but it lost her scent in the area of Houlton Regional Hospital. The U.S. Border Patrol also was conducting aerial searches.

McKenna said that police obtained a search warrant for the single-family home on Bridge Street that Bell shared with her boyfriend and several other people earlier that day and also searched a dumpster in the parking lot of McDonald’s restaurant in Houlton after receiving a report about a piece of soiled clothing found Monday in the back of the lot.

Richard Bowie, director of the Downeast Emergency Medicine Institute, said Tuesday that he and other volunteer searchers from his agency were on the way to Aroostook County to assist in the search when they were alerted about the news.

“This is fabulous,” he said. “I could not have asked to hear anything better.”

McKenna thanked all of the agencies that assisted in the search and was pleased to report a positive outcome to the difficult situation.

As the Maine Turnpike expects 1 million travelers alone over the Labor Day weekend, policymakers are gearing up for a sprint to solve one of the state’s most intractable problems: a long-standing — and growing — transportation funding gap.
Apex Weather END_OF_DOCUMENT_TOKEN_TO_BE_REPLACED

A strong Arctic cold front will push into the region from the northwest tomorrow with a chance for some light snow across the region.
Our Sponsors END_OF_DOCUMENT_TOKEN_TO_BE_REPLACED