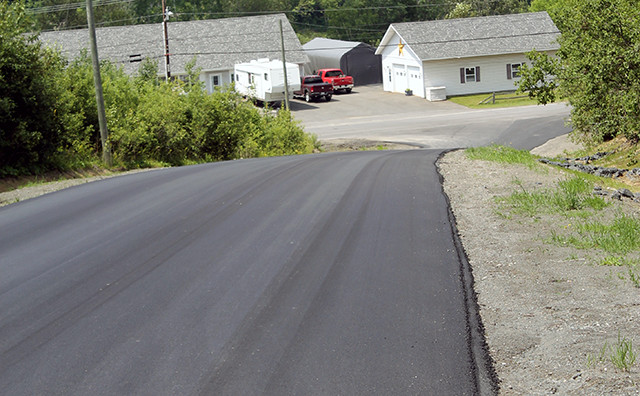 Don Eno, SJVT / FhF Staff Writer • July 25, 2016
The town of Frenchville will put down nearly 10 miles of fresh asphalt on three different roads this summer as part of a $1.35 million project.

FRENCHVILLE, Maine — The town of Frenchville will be putting down nearly 10 miles of fresh asphalt on three different roads this summer as part of a $1.35 million project. “This is the first major work like this in, I would say, 30 years,” said Town Manager Ryan E. Pelletier, Thursday morning, July 21.

Crews had completed a little more than half of the road work as of Thursday, Pelletier said. “Things are on schedule and looking pretty nice,” he added.

On Pelletier Avenue, the town is doing 2.5 miles of asphalt resurfacing and ditching, as well as grading and chipsealing an additional 1.5 miles after the hot top ends.

Controversy arose this spring regarding the legitimacy of spending town money to fix the far end of Pelletier Avenue. Some residents felt the road was not a town road. Pelletier, residents and the Board of Selectpersons, over the course of multiple public meetings, reviewed the history of road development and the ability to accurately assess how many outlying roads are actually owned by the town.

In the end, the consensus was that, by virtue of continued development on the these roads and the continued plowing and maintenance of them by the town, it was legitimate for town funds to be used for the roads project this summer.

As part of the final plans, the last portion of Pelletier Avenue will not be resurfaced with asphalt, but will be upgraded with two coats of chipseal.

The town is also working on approximately 4.5 miles of Church Road, including side ditching, culvert replacement and the application of two inches of surface pavement. They also regraded, as needed, in some sections. Another 2.5 miles of ditching, grading and asphalt application is taking place on Starbarn Road.

The town is also using some new technology in part of the roads project, Pelletier said. More than a dozen “weeper pipes” or “weeper drains” were installed under the road surface in locations that were prone to severe frost heaves.

“This way we can let the road breath and release the water,” said Pelletier.

Pelletier estimates that approximately 8,000 tons of asphalt, produced in Presque Isle, have already been laid down. Lane Construction is contracted to provide and lay down the asphalt, Pelletier said. All of the pavement delivered so far has been within required specifications.

He added that contractors based in the St. John Valley are doing the majority of other work, such as grading, ditching and culvert installation.

Funding for the roads project is coming primarily from a Maine Municipal Bond Bank. That bond is expected to be finalized in the spring, Pelletier said. Until then, the town is utilizing a loan from Key Bank. Project funding also comes from $25,000 in state Local Road Assistance Program monies, and $75,000 in local funds that were approved at the last town meeting.

Pelletier said he anticipates the road work to be complete by the end of September. Centerline and shoulder striping on the new sections are scheduled for 2017, he added.

Three candidates are vying for two seats on the Fort Kent Town Council. Voters will decide which of the three -- Corey Pelletier, Brandon Dayton or Andrew Caron -- will get a seat during the town’s annual election on Monday, March 22.
Apex Weather END_OF_DOCUMENT_TOKEN_TO_BE_REPLACED

A warm front lifting across the region this morning will lead to increasing clouds with snow overspreading the area later this morning. A cold front will move through this afternoon with snow likely for a period before tapering off behind the front this evening with overnight lows occurring relatively early around midnight.
Our Sponsors END_OF_DOCUMENT_TOKEN_TO_BE_REPLACED