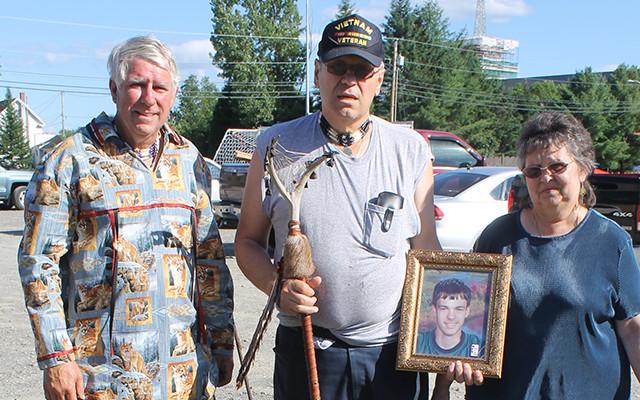 Don Eno, SJVT / FhF Staff Writer • July 25, 2016
"There are a lot prayers for Jesse in these ashes.” Sacred fire burned in honor of Jesse Bouchard during the annual Wesget Sipu Pow Wow in Fort Kent.

“Jesse was the fire keeper last year. He loved doing it,” said his grandfather Roger Bouchard. For two years, Jesse had been one of the fire keepers at the pow wow, staying up late into the night.

A car accident took Jesse Bouchard’s life in August of 2015.

The sacred fire burns throughout the pow wow, and fire keepers must make sure it neither goes out nor diminishes.

“When Jesse died last year, we made a sacred fire and kept it burning for six days,” said John Pelletier, one of the pow wow organizers.

According to the group, the sacred fire holds the good wishes and prayers of those attending the celebration. Ashes from this year’s pow wow will be used to start next year’s, in keeping with tradition.

Bouchard’s grandparents received a bag of ashes from the sacred fire Sunday. “There are a lot prayers for Jesse in these ashes,” Roger Bouchard said.

Along with the sacred fire, the weekend celebration allows people a glimpse at traditional and contemporary Native American and indigenous peoples’ traditional music and dance. Participants attending this year’s pow wow in Fort Kent traveled from Quebec, Montana, and other parts of New England.

Rose Sirois, whose grandfather grew up in Frenchville, lives in South Portland. She said she was finally able to make the trip to the Wesget Sipu summer celebration in Fort Kent. “It’s my first time, and it’s wonderful,” she shared.

Although it was her first visit to the Fort Kent-based pow wow, Sirois said she has seen many friends at similar events she attends in other parts of New England.

Kendall Parker is one of those friends.

A resident of Sanborn, New Hampshire, Parker sits on the New Hampshire Tribal Council. He is also a crafter and performer, regularly attending pow wows in that region. “It is always nice to see friends,” said Parker, who was also making his first trip to the Fort Kent event.

Donat Cyr, the Wesget Sipu chief, said Sunday afternoon that the annual pow wow is really intended for the non-tribal community more than anything else. “We do this for the public” Cyr said. “The entire community is welcome. We want people to bring their kids over and have a good time.”

Cyr said this year’s event went well, with strong performances from the drummers and dancers. Next year, he said, he would love to see more residents return to the pow wow. “I am not sure what happened the last few years,” said Donat, “but we want everyone to come back.”

The Wesget Sipu are an organization based in Fort Kent dedicated to the preservation of native culture and traditions. The name is derived from the Mi’kmaq phrase for Fish River, according to the organization’s website, and was created for people with genealogical ties to Native American groups in and around the St. John River Valley of Northern Maine.

As the Maine Turnpike expects 1 million travelers alone over the Labor Day weekend, policymakers are gearing up for a sprint to solve one of the state’s most intractable problems: a long-standing — and growing — transportation funding gap.
Apex Weather END_OF_DOCUMENT_TOKEN_TO_BE_REPLACED

A cold front moved through the Valley early this morning, and it will be followed by an Arctic cold front this afternoon.
Campaign Corner END_OF_DOCUMENT_TOKEN_TO_BE_REPLACED