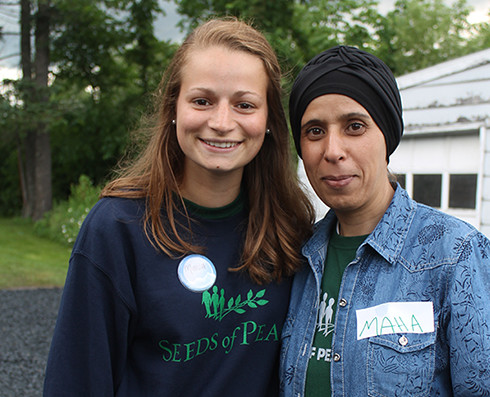 Don Eno, SJVT / FhF Staff Writer • July 22, 2016
A Van Buren family opened their home to a group of visiting delegates from conflict zones around the world, opening up communication and sowing the Seeds of Peace.

VAN BUREN, Maine — More than 20 adult delegation leaders and staff from Seeds of Peace traveled to Van Buren, Monday, July 18, in order to attain a wider perspective of Maine. Seeds of Peace brings teenagers together from opposing sides of conflict zones around the world.

The visitors, who traveled from places such as Israel, Egypt, Jordan and Palestine, are part of the Seeds of Peace program in their respective countries. They help select and prepare teens for participation in the Seeds of Peace camp programs.

The group began hosting international campers in Otisfield, Maine in 1993, and started integrating Maine students in 2000.

In order to better understand the program and see what camp life is like for students, Seeds of Peace invites delegation leaders to travel to Maine. The adults are also dealing with the same cultural and political conflicts as the teen participants, often because of issues of communication and honest dialogue.

Monday, the group arrived at the home of John and Amy Hebert for a night of food, music and camping. The couple also invited many people from Van Buren and the surrounding community.

“Coming to a community like Van Buren and spending time just socializing with people allows them to open up informally,” said Daniel Noah Moses, who is the Jerusalem-based Director of Educator Programs for Seeds of Peace.

Moses said some delegation leaders often enter into the interaction with strongly held beliefs about their particular conflict. “The students and adults are both asking ‘Can we live together?’,” Moses said. “Each person brings a radically different perspective.”

A delegation leader from Seeds of Peace listens to music at the home of John and Amy Hebert in Van Buren on Monday, July 18, 2016. (SJVT / FhF – Don Eno)

However, driving for hours on a school bus packed with camping gear, through thunderstorms and endless miles of Maine forests is a good start to understanding one another.

The travelers arrived in Maine just days before from their respective countries. Moses said some had not yet found much common ground in their efforts to understand one another. As time goes on during their trip to Maine, he explained, most will have opened up and come to better understand the “other side.”

Food and music around a campfire seemed a good way to start that process. There were conversations and laughs among delegates and St. John Valley residents.

“This is great,” said 24-year-old Sarah Nino, a counselor at King’s Academy in Amman, Jordan. “It’s great meeting different people and getting along with people we don’t know,” she said.

Although Nino works at one of the premier schools in Jordan, she has also worked at a refugee camp of 1.7 million people on the border with Syria. Like all of the delegates visiting Maine, she has personally seen conflict.

The participants are never far from one another during the trip, including at night. The group set up three large camping tents in the Hebert’s back yard. Moses said this type of experience is part of what creates opportunities for dialogue, and it is the main focus of what the Maine camp offers teenagers who participate.

Deb Bicknell, a Portland-based consultant who works with Seeds of Peace, approached the Heberts after a mutual friend mentioned having visited the family on a recent cycling trip in the St. John valley.

“She said there were people gathered at the Herbert’s and children playing games in the yard, and it was a regular thing,” Bicknell said. “I thought the Heberts sounded perfect.”

“I was surprised,” John Hebert said, in between talking with the dozens of people gathered at his home. “This is so great.”

The visitors were planning to have a traditional Acadian breakfast Tuesday and then take a tour of the Acadian Village and a local potato farm.

Don Levesque, Roger Damboise and Charles Stewart, members of Les Chanteurs Acadiens, were also on hand Monday night to play music for the gathering. Several delegates took up instruments and played traditional songs from their countries.

Some Palestinian delegates began dancing the Dabke, a traditional Arab folk dance performed at weddings and other happy occasions. At one point, one was teaching the dance to an enthusiastic delegate from Israel.

“You would never see that in the Middle East,” said Bicknell. “It just isn’t allowed.”

Nino, who is also a singer back in Jordan, played guitar and sang several traditional songs. “This is going to help me,” she said. “We need to be part of the solution. We need to be compassionate.”

Storm clouds, which carried a tornado to the Limestone area, passed just to the south of Van Buren on Monday evening. The act of Mother Nature was perhaps symbolic of the good will fostered at the Hebert’s home, where people from differents sides of conflict were taking steps to calm the storm clouds in their own parts of the world.

For more information about Seeds of Peace, visit www.seedsofpeace.org.

As the Maine Turnpike expects 1 million travelers alone over the Labor Day weekend, policymakers are gearing up for a sprint to solve one of the state’s most intractable problems: a long-standing — and growing — transportation funding gap.
Apex Weather END_OF_DOCUMENT_TOKEN_TO_BE_REPLACED

A cold front moved through the Valley early this morning, and it will be followed by an Arctic cold front this afternoon.
Campaign Corner END_OF_DOCUMENT_TOKEN_TO_BE_REPLACED

U.S. Senator Angus King (I-Maine) today visited with students at the University of Maine at Fort Kent (UMFK) to discuss his work in Maine and Washington and answer questions from students.
Our Sponsors END_OF_DOCUMENT_TOKEN_TO_BE_REPLACED