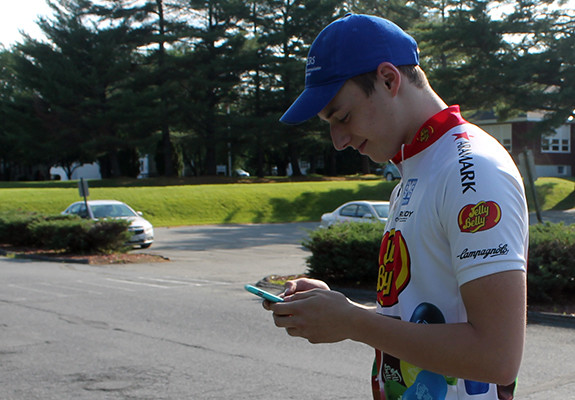 Pokemon popping up in Northern Maine

Jessica Potila, SJVT / FhF Staff Writer • July 22, 2016
It would appear there is a new breed of creature popping up all over Aroostook County: Pokemon.

FORT KENT, Maine — It would appear there is a new breed of creature popping up all over Aroostook County: Pokemon.

They lurk among us – visible only to those with iPhones and other technological devices capable of detecting their sly Pokemon ways via the online game Pokemon GO.

The Pokemon who visit Fort Kent favor the town’s libraries, according to Pokemon Go enthusiast Skyler Bernstein of New Canada. They also like to hang out around The Mooseshack II restaurant on East Main Street.

Perhaps Pokemon like the taste of Mooseshack’s fiddlehead calzones.

In any case, Bernstein, who is a senior at Fort Kent Community High School, is happy to encounter the digital characters who were once the subject of a popular television program and card game.

“It reminds me of when I was a kid. I think it’s like that with a lot of people who haven’t played Pokemon in years. It brought it back again,” Bernstein said of the online mobile game phenomenon.

The concept of Pokemon Go is for users to wander about their communities, GPS-tuned mobile devices in hand, prepared to capture images of Pokemon characters at sites of interest.

Once discovered, players flick Pokeballs at the cartoon creatures in order to catch them.

The game also provides information regarding local history. Whenever a user spots a Pokemon, detailed information about the site is relayed on the player’s mobile device.

Bernstein said he was attracted to play Pokemon GO, in part, because the game has an easy-going nature. He said he is not a fan of violent video games. “This is not a very stressful game – unless you’re a little bit overboard with it,” he said.

Bernstein plays the free game on his iPhone 6. He expressed optimism that Niantic, the San Francisco-based software company which developed Pokemon Go, would update their software to better accommodate rural Pokemon GO users.

“Out in the rural areas there’s not a lot of Pokemon at all. That’s something they’re gonna fix probably.”

In the meantime, he travels to Fort Kent on a regular basis to attempt to catch the 151 Pokemon available for capture. “A lot of them I’ve caught on this campus,” Bernstein said of the University of Maine at Fort Kent.

Other popular local Pokestops, which Bernstein describes as “places of importance” for Pokemon, include the Fort Kent Blockhouse, the Lion’s Pavilion and the America’s First Mile monument.

Bernstein has also spent some time hunting Pokemon in Caribou, where he said users can easily find Pokemon at the United Methodist Church.

Churches and other sacred locations which have become Pokestops have incited the ire of some, according to Bernstein. “Some Pokemon stops are (deemed) inappropriate places… Some people are very upset.”

Among sacred sites which Pokemon have invaded include the Holocaust Museum and Arlington National Cemetery.

Bernstein said developers will likely soon address these issues in the young game.

However, as a student council member and state-qualifying track and field athlete, Bernstein said he appreciates the game for it’s positive aspects. “People who don’t go outside have started going outside,” he said.

And despite the “gotta catch ’em all” catchphrase tied to the Pokemon franchise, Northern Maine values including respect and honor seem to prevail among players of the latest Pokemon game according to Bernstein.

“When I go to a Pokestop I see a few people generally. They’re very friendly. There’s always competition, but in the end it’s all one big game and everyone loves it.”

As the Maine Turnpike expects 1 million travelers alone over the Labor Day weekend, policymakers are gearing up for a sprint to solve one of the state’s most intractable problems: a long-standing — and growing — transportation funding gap.
Apex Weather END_OF_DOCUMENT_TOKEN_TO_BE_REPLACED

A cold front moved through the Valley early this morning, and it will be followed by an Arctic cold front this afternoon.
Campaign Corner END_OF_DOCUMENT_TOKEN_TO_BE_REPLACED