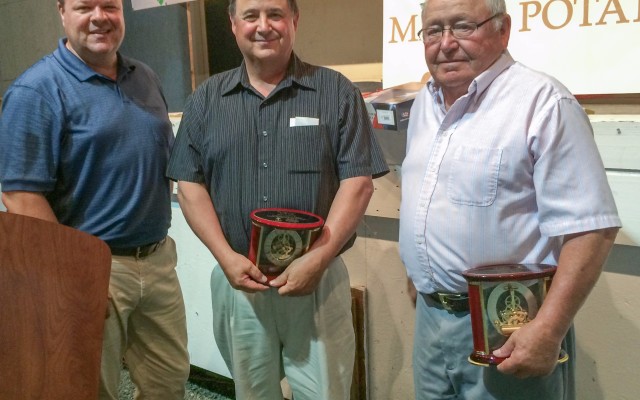 FORT FAIRFIELD, Maine — Maine potato farmers and their supporters gathered for an annual meeting at the Farm Park in Fort Fairfield to enjoy an evening dinner and celebrate reasons for optimism in the industry.

The Flewellings of Easton were honored as the Maine Potato Board’s Farm Family of the Year at the organization’s dinner and meeting July 14, while Ryan Crane of Exeter received kudos as Young Farmer of the Year.

Bruce Flewelling, the fifth generation of Flewelling farmers, oversees 900 acres of potato fields supplying McCain Foods and Frito-Lay, and he’s bringing in his sons, both in their 20s, to evolve operations — as their grandfather Jerry Flewelling continues in “semi-retirement” to help drive trucks, operate farm equipment and combine grain.

The generation of Jerry Flewelling, a 1957 Easton High graduate, witnessed a potato farming evolution in their own lifetime, with the rise of food processing, increasing mechanization, changes in pests and pesticide practices, and the loss of small independent potato farms.

The equipment is “so much bigger and faster. It costs a lot more,” said Jerry. These days, Christopher and Nicholas Flewelling, ages 23 and 26, are also using GPS-guided equipment and other technology that their dad Bruce has embraced.

While there are long-term challenges ahead for Maine potato farmers, Bruce Flewelling said he thinks that the culture and industry is healthy enough that “it will provide a future for the next generation.”

On that front the Maine Potato Board also honored the 2016 Young Farmer of the Year, 30-year-old Ryan Crane of Exeter (whose dad Jim was Bruce Flewelling’s roommate in 1979 at the University of Maine Orono).

Crane returned from Purdue University in Indiana in 2008 to join the family’s Crane Brothers Farm, a 3,000-acre operation growing potatoes for Frito Lay and corn, rye and oats. The business spans with 700 acres in the Androscoggin Valley, 700 acres around Lincoln and 1,600 acres in Exeter.

Receiving his award, Ryan Crane noted that his grandfather, who started using corn as a rotation crop for potatoes, wrote him a congratulations letter noting that “not many potato awards are given outside The County and to receive one is double the honor.”

State Senator Peter Edgecomb of Caribou also gave Crane a bag of Caribou Russet potatoes from his home garden as a gift, and a joke for the crowd.

“If you were able to grow 700 acres of Caribou Russets and sell them for what I had paid Johnny’s [Selected Seeds] for the seed, in one year you would be able to retire and you probably would have enough money to run for Governor as well.”

Also honored at the meeting with an outstanding achievement award was Stephen Belyea, the longtime head of the Potato Marketing Improvement Fund who’s retiring in January 2017.

Belyea has 27 years with the state program, much of it when the program was under the Department of Agriculture, Conservation and Forestry, and for the last three years under the MPB.

The fund helps potato growers modernize their storage and packing facilities with low-interest loans, and has been used by numerous farmers over the years, said Don Flannery, executive director of the Maine Potato Board.

Belyea “has occupied more space in the ag center than anyone else in existence,” Flannery said, referring to Presque Isle Harley D. Welch Agricultural Center, where the MPB is headquartered.

“Not a potato grower in this room tonight has not worked with him at least once,” he said, noting that Belyea was involved in more than 350 projects with about $62 million in related investment.

Belyea, who started his career with the Maine Cooperative Extension, said he expects to work part-time “for a few years, possibly consulting, as health and opportunity permit,” while taking advantage of free time to visit children in Indiana and Ohio, travel and go fly fishing.

Maine is more than eight months into Medicaid expansion under the federal Affordable Care Act and trends around who is enrolling and where they live are starting to emerge, bucking some expectations and pointing out access challenges.
Apex Weather END_OF_DOCUMENT_TOKEN_TO_BE_REPLACED

Low pressure will track into the Atlantic from off the Southeast coast tonight into Thursday with increased cloudiness this evening into the overnight hours.
Campaign Corner END_OF_DOCUMENT_TOKEN_TO_BE_REPLACED

Dale Crafts filed his nomination papers for Feb. 21 with the Secretary of State to officially be placed on the primary ballot on June 9, 2020, for the U.S. House of Representatives 2nd District race.
Our Sponsors END_OF_DOCUMENT_TOKEN_TO_BE_REPLACED