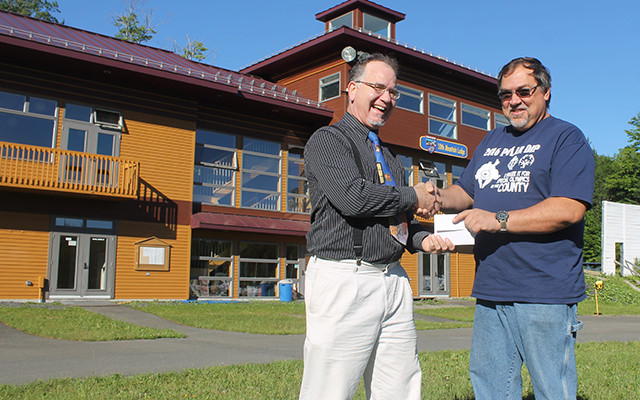 The news organizations held a contest for naming the festival. Belanger entered the contest with the name “Foliage Fest,” which BDN organizers turned into the Foliage Music Fest. The festivities will take place September 18 at the Fort Kent Outdoor Center.

At Foliage Music Fest, festival goers will hear the sounds of a variety of popular Maine bands, such as The Ghost of Paul Revere, Dark Hollow Bottling Company, Ellis Paul, and the Soggy Po Boys. All of the bands perform original tunes.

Belanger said the seasonal beauty of the St. John Valley inspired him to come up with the name Foliage Fest. “I thought, well up at the Tenth Mountain Lodge (at the Outdoor Center) you’re surrounded by the trees. I figured in September many of those leaves will be nice bright colors and you’ll notice the foliage as you go up there and it will be a celebration of the foliage,” he explained.

Northeast Publishing general manager Andrew Birden presented Belanger with a $50 gift card on the lawn of the Tenth Mountain Lodge at the Fort Kent Outdoor Center on Wednesday.

He noted that another musical group may be joining the festival lineup. “We’re on the lookout for an Acadian band,” he said.

Belanger joked that he had no particular campaign strategy to promote Foliage Fest as the winning name of the music festival. “I think I told my daughter so I got one extra vote that way,” he said.

Belanger said he plans to attend the Foliage Music Festival, which will take place Sunday, September 18, from 12 to 7:30 p.m. at the Fort Kent Outdoor Center. Tickets are $10 for individuals who purchase them in advance, or $12 at the door. A Foliage Music Fest family discount is being offered to advance purchasers for families with up to two adults and up to three children, for $30. Tickets can be purchased at www.eventbrite.com/e/the-bdn-foliage-music-fest-tickets-26328780090.

As the Maine Turnpike expects 1 million travelers alone over the Labor Day weekend, policymakers are gearing up for a sprint to solve one of the state’s most intractable problems: a long-standing — and growing — transportation funding gap.
Apex Weather END_OF_DOCUMENT_TOKEN_TO_BE_REPLACED

A cold front moved through the Valley early this morning, and it will be followed by an Arctic cold front this afternoon.
Campaign Corner END_OF_DOCUMENT_TOKEN_TO_BE_REPLACED