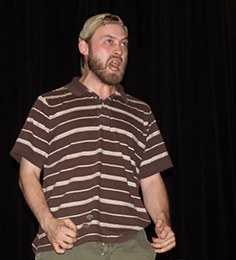 Valley actors explore greed and generosity in ‘The Miser’

FORT KENT, Maine – The University of Maine at Fort Kent is inviting theatergoers to the UMFK Summer Theater production of The Miser, a comedy by the 17th century French playwright Moliere.

Among those cast in the play, and new to UMFK Summer Theater, is veteran stage actress and director Caryn Cleveland-Short.

Cleveland-Short is the wife of UMFK President John Short, who officially took over as head of UMFK on April 1, 2016.

“I decided to participate for the simplest of reasons: I love theater – the feel, the excitement, the pulse of the audience. I enjoy it as an audience member, actor, director or instructor. I support theater in any manner that I can,” she said.

Cleveland-Short, who has a masters degree in communication and theater, said she has won regional and national awards for acting. She also founded a community theater in rural Arkansas. “You have never seen The Three Musketeers until you see it with southeast Arkansas accents. So much fun,” she said.

Aaron Bernstein, longtime director of the UMFK Summer Theater program, said audiences can expect The Miser to provide comedic entertainment, but that it also has a message with which anyone with Northern Maine roots will be able to relate.

“Times are tight in the St. John Valley. Our financial resources, which were never abundant, are dwindling. This community excels at caring for each other during hard times, and this play explores the ramifications of greed and the value of generosity in an insightful and hilarious way that will resonate with our community,” Bernstein said in a press release. “Moliere knows that misers reap what they sow, and is comically merciless in his depiction.”

“It brings laughter, a safe place to cry, and generally helps us look at life with fresh eyes. Theater reminds us that we are all humans, have more in common than not, and provides entertainment. Theater doesn’t have to be big budget shows … all you need is someone willing to watch and someone willing to perform,” she said.

As the Maine Turnpike expects 1 million travelers alone over the Labor Day weekend, policymakers are gearing up for a sprint to solve one of the state’s most intractable problems: a long-standing — and growing — transportation funding gap.
Apex Weather END_OF_DOCUMENT_TOKEN_TO_BE_REPLACED

A cold front moved through the Valley early this morning, and it will be followed by an Arctic cold front this afternoon.
Campaign Corner END_OF_DOCUMENT_TOKEN_TO_BE_REPLACED