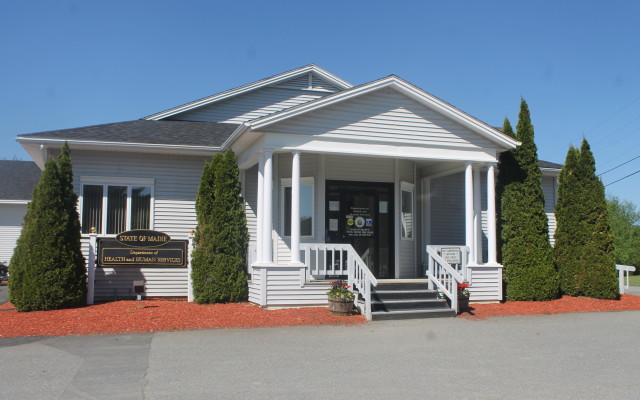 Don Eno, SJVT / FhF Staff Writer • July 19, 2016
FORT KENT, Maine – Following more than a month of uncertainty and concern regarding whether or not they would have to relocate to a central Aroostook location, staff at the Department of Health and Human Services’ Fort Kent office were told Monday, July 18, that the agency would not be closing the St. John Valley office.

FORT KENT, Maine – Following more than a month of uncertainty and concern regarding whether or not they would have to relocate to a central Aroostook location, staff at the Department of Health and Human Services’ Fort Kent office were told Monday, July 18, that the agency would not be closing the St. John Valley office.

The Fort Kent office of the Department of Health and Human Services on Wednesday, June 1, 2016. (SJVT / FhF – Jessica Potila)

“The Department has made the decision to downsize our footprint instead of moving positions,” DHHS spokesperson Samantha Edwards confirmed in an email to the St. John Valley Times, Monday morning.

The 17 employees at the Fort Kent office were sent letters Monday, stating that their positions would not be relocated to the Caribou DHHS, and that the department anticipates finding a new location in Fort Kent.

The letter to employees gave no dates for the move to a new Fort Kent location, and only indicated that “additional details” would be coming in the near future.

On May 27, those employees had been sent a letter informing them that the department would be relocating them to Caribou. At the time, Edwards said the decision was due to the high cost of rent at the current location and a need to improve efficiencies in management.

According to Edwards, the current building space costs DHHS $106,000 annually.

Since then, Governor Paul LePage has had to answer criticism from Valley residents and the Maine State Employees Association about the state’s decision. Protesters had made their feelings about the proposed closing clear when they picketed outside the Fort Kent DHHS offices last month.

There was no immediate comment from the Governor’s office regarding DHHS’ decision not to close the Fort Kent office.

Originally, DHHS had proposed to find some space for “itinerant” services in Fort Kent, which would be open to clients only at certain times of the week. However, the bulk of Fort Kent employees would have been based full-time out of Caribou.

On June 28 and 30, some local DHHS employees and supporters protested the proposed closing. Those opposed to the move were concerned that clients in the St. John Valley would be adequately served by DHHS if the nearest office was located in Caribou.

Former Maine Senator Judy Paradis and her husband Ross Paradis, who live in Madawaska, were among those who protested the planned closure last month.

Paradis said Tuesday she was “absolutely delighted” at the news DHHS would remain in Fort Kent.

Paradis said there are “vulnerable” people who need access to the face-to-face services a local office provides.

As the Maine Turnpike expects 1 million travelers alone over the Labor Day weekend, policymakers are gearing up for a sprint to solve one of the state’s most intractable problems: a long-standing — and growing — transportation funding gap.
Apex Weather END_OF_DOCUMENT_TOKEN_TO_BE_REPLACED

Low pressure will move towards the Northeast from a low pressure over the Ohio Valley/Pennsylvania region this evening with the primary low tracking into Québec tomorrow.
Campaign Corner END_OF_DOCUMENT_TOKEN_TO_BE_REPLACED

U.S. Senator Angus King (I-Maine) today visited with students at the University of Maine at Fort Kent (UMFK) to discuss his work in Maine and Washington and answer questions from students.
Our Sponsors END_OF_DOCUMENT_TOKEN_TO_BE_REPLACED