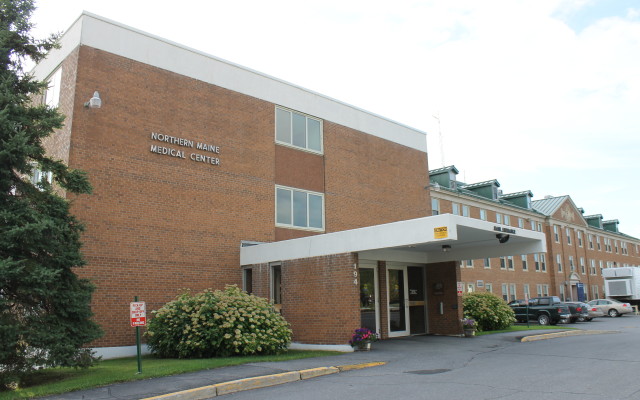 Contributed • July 19, 2016
FORT KENT, Maine – The Maine Board of Licensure in Medicine and the Office of the Maine Attorney General have reprimanded a Fort Kent psychiatrist for “unprofessional conduct,” according to a Monday, July 18 press release from the board. Northern Maine Medical Center in Fort Kent.

FORT KENT, Maine – The Maine Board of Licensure in Medicine and the Office of the Maine Attorney General have reprimanded a Fort Kent psychiatrist for “unprofessional conduct,” according to a Monday, July 18 press release from the board.

Mark Overton, M.D., who practices at Northern Maine Medical Center in Fort Kent, will have his license suspended August 16 to August 25 and pay a civil penalty of $1,000.

Overton entered into the consent agreement July 1, according to board records.
This action by the board originated from a report that Overton engaged in a “romantic workplace relationship” with a female employee of the hospital and treated the employee as a patient after their relationship had ended.

“NMMC acknowledges the situation and we have dealt with the incident internally in addition to the Maine Board of Medicine’s action,” NMMC spokesperson Joanne Fortin wrote in an email Monday afternoon.

In August of 2015, NMMC reported it had disciplined Overton for the misconduct, which took place between February and April of 2014, according to board documents. At the time of the interaction with the employee, Overton was not treating her as a patient; however, he did subsequently treat her and one of her minor children.

Overton admitted to the interaction with the employee and expressed remorse at his actions. At that time, he agreed to attend sexual harassment and professional workplace training, as set forth by NMMC.

“Dr. Overton is an experienced and highly qualified clinician and has helped many people in our community. We believe everyone deserves a second chance and we support Dr. Overton through this matter,” Fortin wrote.

The original complaint to NMMC regarding Overton was submitted by the female employee’s former spouse in August of 2015, according to records.
In October of 2015, following its own investigation, the board initiated a complaint against Overton. In April, the board voted to defer the matter to an adjudicatory hearing and also offered the option of a consent agreement with Overton.

All board disciplinary actions are reported to the National Practitioner Data Bank and the Federation of State Medical Boards Action Data Bank. These reports are regularly reviewed by every state licensing board in the country.
The board is made up of six physicians, three members of the public and a physician assistant appointed by the Governor. Disciplinary actions taken by the board are available to the public either by telephone at 207-287-3601 or at www.maine.gov/md.

Any citizen may request an investigation of a physician or physician assistant by calling 207-287-3608, by letter, or by visiting the board’s web site.

As the Maine Turnpike expects 1 million travelers alone over the Labor Day weekend, policymakers are gearing up for a sprint to solve one of the state’s most intractable problems: a long-standing — and growing — transportation funding gap.
Apex Weather END_OF_DOCUMENT_TOKEN_TO_BE_REPLACED

A strong Arctic cold front will push into the region from the northwest tomorrow with a chance for some light snow across the region.
Our Sponsors END_OF_DOCUMENT_TOKEN_TO_BE_REPLACED