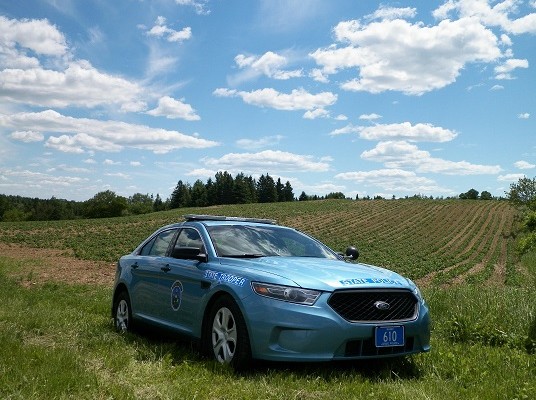 Contributed • July 5, 2016
AROOSTOOK COUNTY – The Maine State Police Troop F barracks in Houlton responded to the following incidents from June 27 – July 3, 2016. (Editor’s Note: An arrest or summons does not constitute a finding of guilt.

(Editor’s Note: An arrest or summons does not constitute a finding of guilt. An individual charged with a crime is presumed innocent unless and until proven guilty at criminal proceedings.)

-Tr. Endre and Recruit Adams stopped a vehicle for a 29-A violation. During the stop the operator advised Tr. Endre that he was on probation for prior drug charges. Through an investigation and search of the vehicle; Tr. Endre and Recruit Adams found a small amount of marijuana. The male operator also tested positive for methamphetamine after a urine test. The operator’s probation officer was contacted and advised that he would address the issues at a later date.

-Tr. Curtin investigated a suspicious incident in Portage where a camp owner found her outside door ajar. Nothing was found to be missing from the camp and the investigation is ongoing.

-Tr. Curtin investigated a criminal trespass complaint in Perham in which a landowner found a vehicle full of people drinking on his property. The vehicle left prior to his arrival. Criminal trespass warnings will be issued when subjects are located.

-Tr. Curtin investigated a civil land dispute in St. John. The parties were advised to seek legal advice and to have their properties surveyed.

-Tr. Curtin investigated a property damage crash in Frenchville in which a woman lost control and left the road after avoiding a moose.

-Tr. Curtin investigated a property damage crash where a male subject swerved to avoid a moose and struck a guardrail.

-Tr. Luce and Recruit Desrosier investigated the theft of a motor vehicle. Their investigation led them to a 17-year-old female from St. Agatha that took the vehicle while she was at a party. The girl stated after leaving she parked the vehicle so she would not be arrested for OUI. Trp. Luce summonsed the girl for unauthorized use of property and released her to her parents.

-Tr. Sucy and Tr. Sylvia conducted traffic enforcement on Interstate 95 during the holiday weekend utilizing Lidar. Approximately 20 vehicles were stopped and issued summonses for speeds in excess of 90 mph in the 75-mph zone. Highest speed encountered was one motorist travelling at 102 mph.

As the Maine Turnpike expects 1 million travelers alone over the Labor Day weekend, policymakers are gearing up for a sprint to solve one of the state’s most intractable problems: a long-standing — and growing — transportation funding gap.
Apex Weather END_OF_DOCUMENT_TOKEN_TO_BE_REPLACED

A strong Arctic cold front will push into the region from the northwest tomorrow with a chance for some light snow across the region.
Our Sponsors END_OF_DOCUMENT_TOKEN_TO_BE_REPLACED