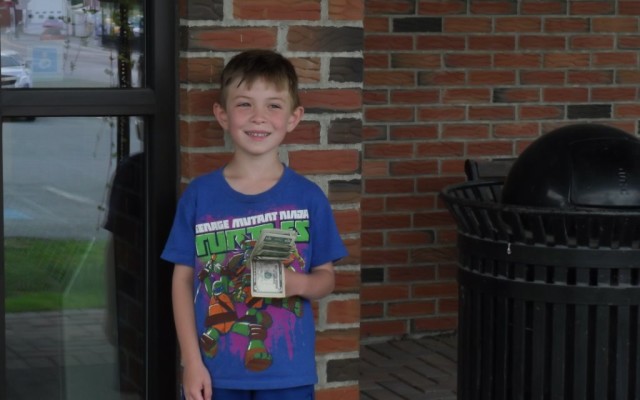 Jessica Potila, SJVT / FhF Staff Writer • July 1, 2016
FORT KENT, Maine –Fort Kent Elementary School second-grader Caleb Guy has never played poker before, but he knows how to ride his bicycle. He and his father, Travis Guy rode their bikes in a Poker Run which the Fort Kent Bicycle and Pedestrian Committee sponsored on Saturday, June 25.

FORT KENT, Maine –Fort Kent Elementary School second-grader Caleb Guy has never played poker before, but he knows how to ride his bicycle. He and his father, Travis Guy rode their bikes in a Poker Run which the Fort Kent Bicycle and Pedestrian Committee sponsored on Saturday, June 25.

The father and son pair were the first to complete the poker run, and Caleb’s winning hand of three aces took home the prize pot of $34, all of which Caleb donated to the Fort Kent Elementary School playground fund, a decision he made prior to the event.

“He was chatting with his dad and he said, ‘If I win I’ll donate money to the playground,’” said Caleb’s mother, Jodi Guy.

“I just thought it was a good idea,” said Caleb, who will turn seven on July 8.

The poker run included 17 bikers and walkers who enjoyed the Fort Kent trail system while picking up a poker hand of cards at the America’s First Mile monument on West Main Street, the picnic area at Scout’s Point behind Acadia Federal Credit Union, Riverside Park, Jalbert Park, Lonesome Pine Trails, and back at the First Mile monument.

Fort Kent Director of Planning and Economic Development and Bicycle and Committee member Steve Pelletier said the purpose of the poker run was to provide exposure to the new trails in town. “Our committee is all about encouraging an active community,” he said.

Pelletier said he was moved by Caleb’s decision to donate his winnings to the playground fund.

“For that little boy to give his money- that’s great,” he said.

When Fort Kent resident Paul Berube learned of Caleb’s generosity, he was inspired to follow suit and also donated to the playground fund. Berube mounted a challenge to others in the community to do the same.

“Paul called me and asked me the amount he donated and he wanted to start the challenge,” said school secretary Jill Saucier Jandreau.

Berube also posted his challenge on the FKES Facebook page: “Unselfish Kid. That is awesome! I’m going to match his donation of $34. Any other takers out there,” he wrote.

“There are at least four people that said they were matching and I have already received money from one person,” Saucier Jandreau said.

The Fort Kent Elementary School Parent Teacher Organization has been raising money since last fall to replace the 30-year-old playground equipment currently at the school.

Caleb said he is most looking forward to playing on the slides at the new playground, once it is built.

“I’m pretty proud of him. That’s a pretty big deal for a kid his age. Thirty-four dollars isn’t a whole lot in the grand scheme of things, but it’s a lot of money for a kid,” Jodi Guy said of her son.

Anyone interested in taking on Berube’s challenge of matching Caleb’s $34 donation should send a check or money order to:

As the Maine Turnpike expects 1 million travelers alone over the Labor Day weekend, policymakers are gearing up for a sprint to solve one of the state’s most intractable problems: a long-standing — and growing — transportation funding gap.
Apex Weather END_OF_DOCUMENT_TOKEN_TO_BE_REPLACED

A cold front moved through the Valley early this morning, and it will be followed by an Arctic cold front this afternoon.
Campaign Corner END_OF_DOCUMENT_TOKEN_TO_BE_REPLACED