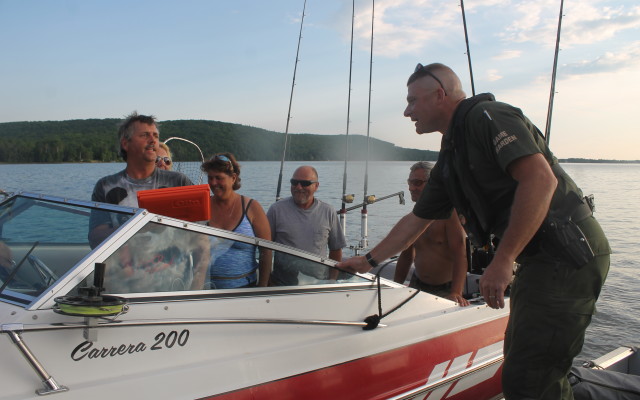 Jessica Potila, SJVT / FhF Staff Writer • July 1, 2016
SINCLAIR, Maine – Law enforcement officials with the Maine Warden Service patrolled the state’s many waterways during the weekend of June 24-26 as part of an Operation Dry Water heightened awareness weekend campaign to reduce alcohol-related boating accidents and fatalities. Operation Dry Water is a national non-profit organization with a mission to raise awareness about the dangers of boating under the influence.

SINCLAIR, Maine – Law enforcement officials with the Maine Warden Service patrolled the state’s many waterways during the weekend of June 24-26 as part of an Operation Dry Water heightened awareness weekend campaign to reduce alcohol-related boating accidents and fatalities.

Operation Dry Water is a national non-profit organization with a mission to raise awareness about the dangers of boating under the influence. “Alcohol use is the leading contributing factor in recreational boater deaths,” according to the organization’s website.

Marquis and Pomerleau patrolled in an 18 foot Lund Alaskan motorboat with an aluminum hull, which Marquis said “can take a fair amount of beating.” He said the sturdiness of the boat makes it ideal for springtime search operations, when ice is still present in the waters of Northern Maine. The boat can cut through the ice without cracking the hull.

“This lake has a healthy combination of everything: die-hard fishermen, play boats set up for a water-skiing family, cabin cruisers, party barges. It’s pretty popular for Sea-Doos,” Marquis said.

The Warden Service has “regulative authority to stop and check boats,” on any day of the year, according to Marquis. However, as was the case with the Operation Dry Water weekend, Marquis said he rarely encounters any serious violations on the waterways he patrols.

“I’ve been on the lake for 10 years, so I’ve checked a lot of the same boats over and over again. They’re all in pretty good shape. They may be missing one little thing or another.”

Marquis is assigned to the Madawaska District, which includes the towns of Madawaska, Frenchville, St. Agatha, Sinclair, Cross Lake and New Canada. “It’s the smallest district in the state, but it’s got a lot of water,” Marquis said.

The Wardens stopped several watercraft Saturday to inspect for boater compliance, but Marquis said he was more concerned with “imprudent operation.”

“Whether it’s a boat, ATV or a car, the slightest bit of impairment affects your reaction time and endangers someone else or yourself, and that’s why it’s not a good idea to do,” he said.

Although operating a watercraft under the influence does not affect an individual’s driver’s license, according to Marquis, the same blood alcohol limit standards apply. It is illegal for a person to operate a motorized boat or personal watercraft with a blood alcohol level of .08 or greater.

Wardens say the risks of someone operating a boat while intoxicated bring with them a unique set of dangers.

“A drunk one goes in and the buddy ends up drowning trying to save him. They always take someone with them,” Marquis said.

Pomerleau, who is normally assigned to the Ashland District but teamed up with Marquis for Operation Dry Water, pointed out another risk.

“If you fall out of the boat you’re never gonna catch the boat,” he said. “If that boat circles around, then you get to dodge the propeller or risk hypothermia.”

“And that’s if you were smart enough to put a life jacket on,” Marquis added. “I get that they’re uncomfortable sometimes, but I’d say 95 percent of the time it would save your life. It never ceases to amaze me how people who can’t swim are never the ones wearing a life jacket.”

The Wardens came across a boat with a party of fishermen whose lines were up. Marquis asked the sportsmen if they had any success catching fish.

“No luck. Nothing at all,” a member of the fishing party replied.

Marquis asked the group if they had enough life jackets on board for everyone.

As one member of the party began pulling life jackets out from the boat’s storage cabinet another offered that he had seen the show “North Woods Law,” and was sorry it was being canceled.

“We respect what you guys go through. It shows us what you do,” the man said.

He said he recalled watching an episode of the show where some children were injured while riding a four-wheeler. “That hits home,” the boater said. “I’ve got four little guys.”

Marquis inquired what the man does for work. He replied that he is a lineman for a power company.

“So safety’s a big thing. You stay alive that way,” Marquis said. “Why don’t you pull those (life jackets) out in case someone does go overboard so you can get it really easy.”

The man complied and the group and the wardens wished one another well as they all went on their way.

“Most of the people we deal with are very respectful – even people in violation. When everything is said and done, they say ‘thank you’ and ‘have a good day.’ Generally speaking, the sportsmen that recreate in Maine treat us pretty well for the most part,” Pomerleau said. Marquis agreed.

Both Wardens also agree that there is a deterrent effect when law enforcement officers patrol the water.

“I’d like to think us being out here is a deterrent,” Marquis said. “I’d also like to believe even when we’re not here, people obey the laws. That’s the whole point of integrity. You either have it or you don’t. Do you do the right thing when no one is watching?”

For more information about Operation Dry Water, visit the organization’s webpage at www.operationdrywater.org.

As the Maine Turnpike expects 1 million travelers alone over the Labor Day weekend, policymakers are gearing up for a sprint to solve one of the state’s most intractable problems: a long-standing — and growing — transportation funding gap.
Apex Weather END_OF_DOCUMENT_TOKEN_TO_BE_REPLACED

A cold front moved through the Valley early this morning, and it will be followed by an Arctic cold front this afternoon.
Campaign Corner END_OF_DOCUMENT_TOKEN_TO_BE_REPLACED