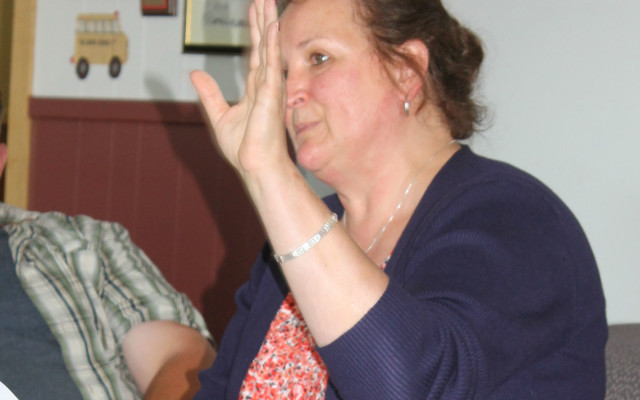 Madawaska voters rejected the nearly $6.4 million budget at referendum on June 14, with 517 voting against it and 353 voting in favor.

Since then, Superintendent Gisele Dionne and her staff have revised the budget, reducing the local tax commitment by $127,000, mainly through revised revenue forecasting. She presented that new budget to the school committee at a June 22 meeting.Madawaska voters rejected the nearly $6.4 million budget at referendum on June 14, with 517 voting against it and 353 voting in favor.

Following their meeting on Monday, June 27, the town’s finance committee suggested consolidation, aligning spending more closely to the state’s Essential Programs and Services minimums, and moving the central office to the elementary school and combining the superintendent and elementary school principal positions into one, as ways to reduce the budget.

Voting in favor of sending the revised budget to voters were Dave Morneault, acting chair for the meeting, and Tammy Cote. Committee member Eric Morin voted against the motion, stating that he thinks more work could be done to revise the budget and present it to the voters in a way that will garner their support.

By statute, the school has 45 days to present another budget to voters, Dionne said, but added there is no penalty from the state if it is delayed beyond that.

Peter Clavette, one of two finance committee members in the audience Thursday evening, said he had doubts the revised budget would pass at the ballot box.

“We build these budgets now with what we have. Could there be cuts in the future? Yes. But we need a budget now and we need to catch up,” Dionne replied.

Regarding the development of a strategic and “actionable plan’ for school consolidation within Madawaska, and regionalization among other high schools, Dionne said she agrees with the finance committee on the long term value of doing this.

“But, there is a reality here,” she said. “We have no money for a consultant,” she added, explaining that the myriad of regulations and considerations required in such consolidations is best handled with assistance from experts.

Dionne discussed conversations she had recently with staff from both Governor LePage’s office and the Maine Department of Education, which lead her to believe help from the state is forthcoming with regard to school consolidation plans.

Regarding housing the superintendent’s office at the elementary school, Dionne questions how much would actually be saved. Two half-time secretarial positions were cut in each school this year, she said, with those duties being taken on by her support staff.

As far as combining the superintendent and elementary school principal into one, Dionne said, “I’ve lived it,” and described her typical day when she previously filled both roles at once. She said being a principal not only means managing the facility and staff, but dealing directly with students, which can take up a large portion of the day.

Dionne said she thinks it highly unlikely that, in the case of Madawaska, one person could do both jobs effectively. “If this community wants a combination superintendent / principal, they need to advertise for one,” she said, “Because it’s not me.”

In its recommendations regarding aligning school budget lines with state, finance committee members estimated that three teaching, a guidance and two clerical positions could be eliminated.

“You can bring the school to EPS levels, if that’s what people want,” said Dionne, but warned the consequences would likely include eliminating sports, AP classes, music, band, electives, and most other extracurricular activities. Reducing to EPS minimums would also adversely impact dining services and transportation, she said.

“These are just recommendations,” Clavette said. “You need to to do what you need to do. We (finance committee members) have a responsibility to the public to point out areas where there are opportunities. The finance committee is only asking that these be looked at.”

Dionne and school committee members agreed that researching these areas are of value, but that budget needs to be in place to gain some stability.

The group also discussed if there was an opportunity for the town to help the the school and taxpayers by utilizing a portion of its fund balance, or reserve account, to offset the school budget.

Dionne said the school helped the town in the same way in the past, most recently when it “gave back” $205,000 to the town as part of a property tax abatement agreement with Twin Rivers Paper Inc., precipitated by the devaluation of that company’s facilities in Madawaska.

Selectman Don Chasse, also present at Thursday’s meeting, agreed to help facilitate a discussion between the school department and Board of Selectpersons.

For a July 26 special town meeting, which serves as the school department’s budget hearing, Dionne would need to have the specific warrant articles to the town clerk by July 12. If the new budget passes July 26, then a referendum vote on the school budget could take place on August 9.

As the Maine Turnpike expects 1 million travelers alone over the Labor Day weekend, policymakers are gearing up for a sprint to solve one of the state’s most intractable problems: a long-standing — and growing — transportation funding gap.
Apex Weather END_OF_DOCUMENT_TOKEN_TO_BE_REPLACED

A cold front moved through the Valley early this morning, and it will be followed by an Arctic cold front this afternoon.
Campaign Corner END_OF_DOCUMENT_TOKEN_TO_BE_REPLACED